For a few years now I use Windows, Linux, OS X daily. For years, I've been looking into a language/framework/product that will allow me to build (desktop) applications that can run on all of these OS's. I've looked into QT, PyQT, Java Swing and others. I've looked into the cloud, PaaS, web applications but I couldn't find something that I liked.

Of course, HTML5 has gained a lot of momentum and I've been following it from the very first day, so I was "double" happy when I found out about the Chrome Packaged Apps that look and behave like desktop apps, they can however live perfectly in the cloud and are built purely with web technologies. The fact they can run on my Chromebook too, is the cherry on top.

No time to lose, I jumped into the proverbial Hello World app, which run on my stable Chrome 27.0.1448.0 without a glitch. You have to follow instructions on the previous link to enable the Experimental Extension APIs on chrome://flags/ and ensure you have the Developer mode on in order to be able to load unpacked extensions.

Next thought was of course "let's convert an existing app" and not having too much of a choice I decided to convert my Mandelbrot HTML5 experiment. Quickly, I "cut" two icons in Photoshop, and created a manifest file, only to find out that the application didn't work right away... The problem a security exception:

Refused to execute inline event handler because it violates the following Content Security Policy directive: "default-src 'self' chrome-extension-resource:". Note that 'script-src' was not explicitly set, so 'default-src' is used as a fallback.

I guess everybody who tries to convert their app in 3 seconds blindfolded will have the same outcome, so here how to fix that. A little bit of Googling quickly reveals that the Content Security Policy (CSP) for packaged apps doesn't allow onclick events, therefore the developer has to either properly rewrite the application to use the APIs provided or sandbox the offending pages. Adding the following to my manifest.json does the trick:

The next issue I had, was that my app had a <body onload="..."> handler which didn't fire. Adding a JavaScript onload handler in my application's main .js file worked:

Well, long way to go still and a lot of things to learn and explore, however I do feel like what I was looking for all these years, has started to materialize courtesy of Chromium and its awesome APIs. I cannot wait until the apps can be added to the chrome web store and be accessible through the upcoming chrome app launcher. 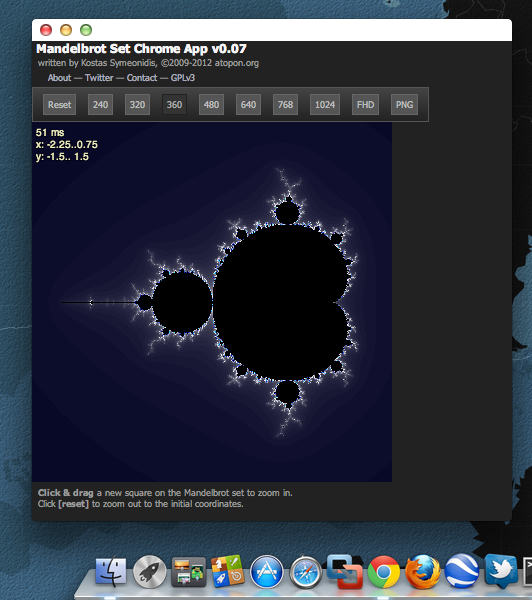 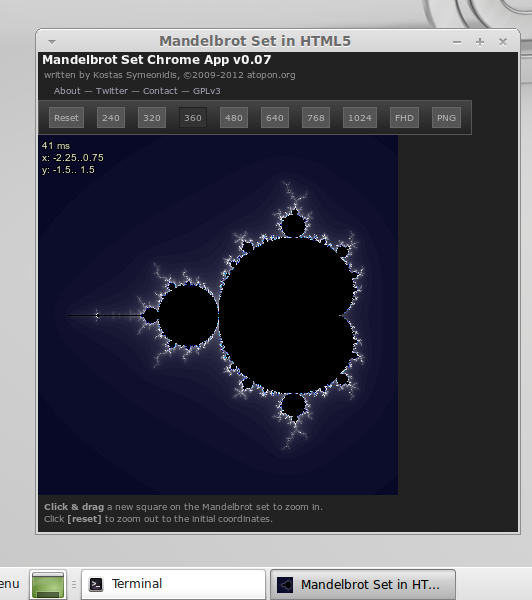 
For the observant reader it will look like the Linux app is faster than both the Mac and the Windows version. However, the test is really very small so you can't really read into it. I have not yet benchmarked their speed. I must say though that my 4+ yr old MBP did slightly better than my 2yr old massive Windows rig and Linux went best of all, even though it was running in a virtual machine inside Windows! :-] Not a good test. Definitely not!

All the source code of the above app is available at my public bitbucket repository.
apps chrome development html5

Popular posts from this blog

GetDIBits vs. Scanline vs. Pixels[] in Delphi Bitmaps

- February 21, 2010
I've been always wanting to sit down one day and solve this problem; test the speed of manipulating pixels on a Bitmap using the three options: - the convenient but understandably slow Pixels[], - the "interesting" Scanline property and - the Windows API GetDIBits and SetDIBits. I have been traditionally using Pixels for quick work and the Get/SetDIBits for low-level pixel manipulation such as the filters used in ToolBox . Never really used the Scanline property in anger, I was always thinking, DIBits "had" to be quicker. Little I knew... I have been experimenting with two tools that I've written and never released to the public domain. The first is the BMPCreator which I wrote in order to create 256-level grayscale bitmaps, the other is the IconCreator which uses a grayscale bitmap and applies color maps to it, giving you the ability to create different colored versions of the same icon (like in my database visualization tool VirtualTreeNavigator ). Yester
Read more

- May 06, 2017
About two years since my second post on installing a Linux distro on VMWare Workstation , I think it's time for a new update. Today, I got hold of an ISO image of Zesty Zapus ( Ubuntu 17.04 64-bit ) on the cover disk of Linux Format (June '17) and went immediately to "work"... What follows is my latest "recipe": Ingredients a downloaded ISO image of your favourite distro a newly created virtual machine with 4-8GB of RAM, a 40-60GB disk and a couple of CPU cores Installation Mount the ISO image to your VM's optical drive and boot it up, then follow the instructions to install your distro selecting your preferences (timezone, keyboard layout, etc.). For accessing your VM via ssh from your host, it helps if your Linux account has the same username as the one on your host OS (Windows, OS X). Once the installation finishes and the VM boots up, log in with your newly created user account and password and admire the new clean desktop. It wo
Read more

- April 17, 2013
Some of you may be familiar with the bitmap (raster) fonts that I have created a few years back or the Raster Font Editor software that I've written for MS Windows. I've been using Linux quite a lot recently so I decided at some point to convert them to BDF (Binary distribution format) files. Here's a quick guide on how to download them and install them: Download Fonts You can either download from here or type this from a terminal window: wget http://www.cylog.org/files/fonts/cylog_fonts_bdf.zip Unzip and Copy fonts In a terminal window type the following: unzip cylog_fonts_bdf.zip mkdir ~/.fonts mv *.bdf ~/.fonts cd ~/.fonts ls ...and ensure you can see the *.bdf files listed. Convert the BDF files to PCF To do the conversion we use the command line utility bdftocpf , and then we remove the BDF files: bdftopcf -o leros10.pcf leros10.bdf bdftopcf -o leros.pcf leros.bdf bdftopcf -o lini.pcf lini.bdf bdftopcf -o yamahana.pcf yamahana.bdf bdftopcf -o ya
Read more